It is increasingly recognised that the polar oceans (Arctic and Antarctic) are particularly sensitive to OA. These high latitude polar waters are very challenging regions for the collection of EO data.

The remote and often dangerous environment of Arctic waters makes the collection of in situ data difficult and expensive. Therefore, the Arctic is one region where the use of EO data could be of great benefit to the OA community as it has the potential to provide spatial data over large regions where the collection of in situ data is difficult or sometimes even impossible. The results from this case study will characterise the limitations of the novel EO methods at these high latitudes and also inform the SMOS and optical sensor user communities of issues that need to be addressed in order to increase the use of such EO data in polar regions. It will exploit Cryosat-2 data, such as wind and sea-ice thickness, which can be used to indicate upwelling and the location of seasonal sea ice, in addition to "classic" microwave sensor used for sea ice concentration and extent estimate.

A recent comparison between the Arctic and the Antarctic highlighted that relatively lower alkalinity, enhanced warming and nutrient limitation in the Arctic Ocean makes it more vulnerable to OA going into the future (Shadwick et al., 2013). As sea ice retreats as a result of increased warming, more open water will become available for air-sea gas exchange as well as for primary production (McGuire et al., 2009). These, and changes in the freshwater budget (Peterson et al., 2002), are likely to alter the rate at which the Arctic Ocean is acidifying.

The European sector of the Arctic Ocean (described here as the Nordic Seas and Barents Sea) is an important area to monitor as it represents the area where the largest exchange of water with the Arctic Ocean occurs. An average of 8 Sv of Atlantic water flows north into the Arctic Ocean from the Nordic Seas, through the Barents Sea and the Fram strait (Hansen and Østerhus, 2000). A significant amount of anthropogenic carbon is therefore transported in the Atlantic waters into the Arctic Ocean (Jeansson et al., 2011). The Arctic regional case study will primarily focus on an extension of the domain described in Takahashi and Sutherland (2013) as the east Greenland Iceland and Norwegian Seas domain. The extension will cover the wider Barents Sea region [66–80°N, 0–60°E].

There are a number of difficulties to overcome in using this region as a test case. The freshwater influences from rivers and sea ice could potentially alter alkalinity-salinity relationships, thereby influencing any downstream calculations of the carbonate system. We aim to overcome this issue by utilising novel empirical data from rivers in this location. There may be additional interference with ocean colour products in this region in the near-shore locations and seasonally as a result of coccolithophore blooms, which additionally alter total alkalinity. We aim to overcome this by investigating empirical relationships with alkalinity during coccolithophore blooms to make an evaluation of how sensitive alkalinity is to coccolithophore calcification. Additional difficulties may come from the use of satellites in this region, the utility of which will depend on ice cover and cloud cover. 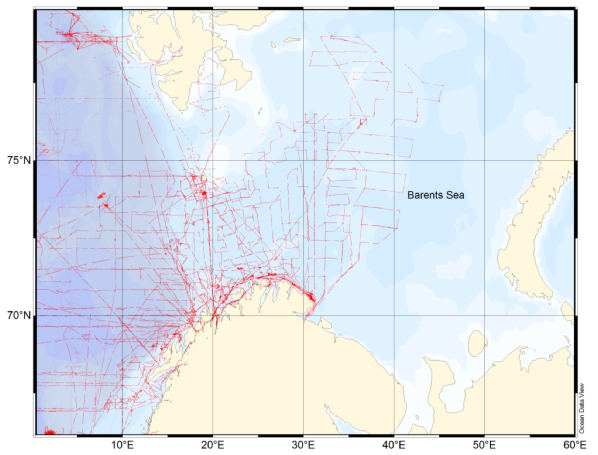