This region is clearly a focus of current OA research with unique characteristics due to the large fresh water influence from the Ganges river (the second largest river in the world by discharge) and other large Indian subcontinent river systems (e.g. the Godavari river).

The fresh water influence in this region makes it an excellent opportunity to exploit and highlight the use of SMOS salinity data. This case study will exploit SMOS data to analyse the large-scale impact of the freshwater input on OA within the Indian Ocean. It will exploit historical in situ data along with new cruise and buoy data which are to be collected during late 2013.

From a biogeochemical perspective, the Indian Ocean is one of the least studied and most poorly understood ocean basins in the world (International CLIVAR Project Office, 2006). This is particularly true for the Bay of Bengal where a relatively small number of hydrographic sections and underway surface observations have been undertaken, despite the notable influence of freshwater on particle dynamics, air-sea carbon flux and surface carbonate chemistry (Madhupratap et al., 2003; Ittekkot et al., 1991; Sarma et al., 2011) 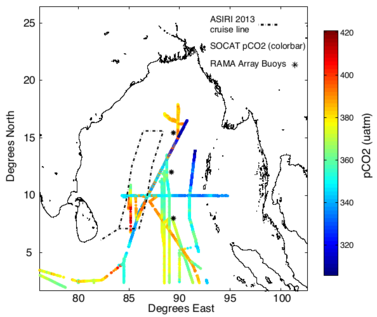 Bay of Bengal case study region, with three example of in situ datasets

We would like to understand the spatial variability of the AT to salinity relationship in the Bay of Bengal. Whether or not the Bay of Bengal shelf acts as a source or sink of CO2 appears to be closely related to freshwater fluxes, with pCO2 increasing at higher salinities (Sarma et al., 2011; Akhand et al., 2012; Sardessai et al., 2010); we would like to understand whether this is a function of dilution of DIC and AT , a low DIC:AT ratio, or increased biological activity influenced by the freshwater (either through nutrient subsidies or stratification).